What is Colic? A Glimpse Into Our Life with a Newborn

After an hour of hands-on soothing, our daughter--exhausted from screaming--fell asleep limply in Daddy's arms. 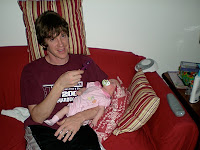 A white noise machine, pacifier, loud rattling sound, and snuggling was the only thing that would stop the screaming this particular day. 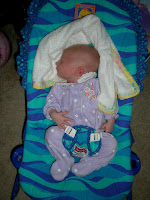 Our first daughter wanted the swing, our second wanted a vibrating seat--this is one we borrowed for a few hours while we went to the store to replace the one that she had "worn-out". Both girls would only sleep if their head was snuggled next to this soft towel. 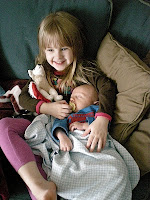 Our son only wanted body-to-body contact. On bad days, he required light pressure on his pacifier as well. Pictured here, his big sister held him in position while I made a quick trip to the bathroom. We also found that if he was in a deep sleep, we could carefully maneuver him from our lap to the couch and lay him in the warm spot where we had been sitting (pictured in the striped blanket). This would buy us about 5 minutes to do something else. After this, we tried putting a heating pad in his bassinet--thinking that the warmth would "trick" him, and help him sleep longer independently. However, it only bought us 20 minutes. We tried a noise machine on the heartbeat sound setting in addition to the heating pad. This too only allowed about 20 minutes. My dad devised his own trick--pictured with the pillow and warm blanket on the floor. We obviously could not leave him unattended in such a position, but it did give our arms a break. When other adults were not around to help, I carried him in the sling on my body, but I chose this as a last option. The sling made my back ache. At night, we took turns sleeping with him on the couch--for weeks, we each got 4 hours of uninterrupted sleep in the bed, while the other rested with him. At week 6 when he could go longer between feedings at night, Karl was the sacrificial trooper and would keep him from midnight to 6AM because if he slept with me, he would insist on nursing. At 3 months, when he began taking formula, we resumed splitting the night 4hrs/4hrs. During that time, Karl was out of town for 2 different one-week time periods, and I spent the time with my parents who helped out tremendously. My dad and my mom each spent one night on the couch with the baby to let me get some rest. 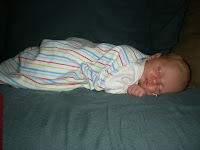 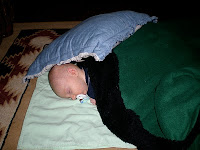 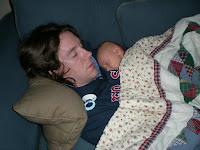 Of course, in the grand
scheme of things, it is only 4 months--feels like forever when you're in such sleep deprivation, but it's not long before it's a distant memory. Our girls are 4 and a half and 2 years now--what a joy they are! And we are thankful that they are healthy, smart, beautiful children! Our son is full of baby smiles and happy days. Nights on the other hand are a different story, and we begin the journey of helping yet another post-colic baby sleep through the night on his own...

Big Sister said it well, when asked if her baby sister cried a lot, she replied, "No, she screams." 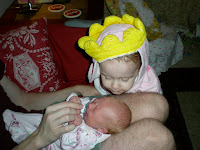 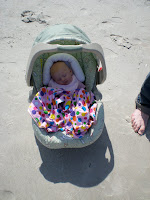 After a long drive to the beach, the sounds of the ocean were so soothing that she remained in a deep sleep that lasted for 2 hours! Unfortunately, the white noise machine on the ocean-setting did not produce the same results.