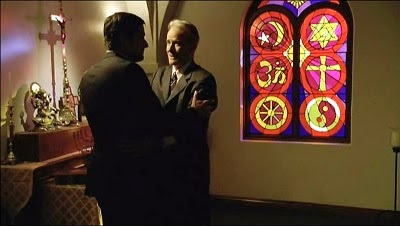 I've been thinking about the finale of LOST for the past week or so. I loved watching that show, and I'm a little sad that it has ended. I love how there was a whole culture surrounding the mystery of it--how people would talk each week about the hidden messages and how each story was intertwined with each other. One critic called it the "best dramatic TV series of all time." Another said that {paraphrase:}"no other show in the history of television has had viewers researching history, literature, religion, mythology, etc." People are more knowledgeable because LOST was on TV for 6 years. Towards the end, all of us Christian viewers were hoping that the unveiling of the Big Picture would have Christian themes. (Or maybe since that is our view, we kept finding the Christian themes in it). Certainly, Jack sacrificing himself to save the world is reflective of the main idea of Christianity. But did you catch the stain-glass window as Jack is about to pass into the heaven-like afterlife? I noticed it immediately. It represented 6 different, and opposing world religions--suggesting that all result in the same afterlife. I wish I had the time to delve into all the themes of LOST, but I don't. Fortunately, my friend Stephanie, and fellow LOSTite, has been blogging about the show for quite some time. She has also written in-depth reviews and posted a world-religions chart showing the contrasts and the impossibility of all religions leading to the same outcome. Please check out her blog InfiniteQueso That link takes you to her write-up about the stained glass window, but dig around for the following articles and more. She is a great writer with many good thoughts.
pop-culture Renewing My Mind World View

- February 16, 2018
Want to stay connected and share moments with Facebook friends but not get overwhelmed or frustrated by controversy?
Facebook is the space where our connections are based on friendships, whereas other platforms can be more relationally removed and driven by subject—you follow accounts that feature your interests or inspirations, whether food, travel, world issues, self-improvement, etc. The average person on facebook (the exceptions being celebrities and business owners) interacts with a wide variety of people from real life—former classmates, extended family, co-workers, people in your community, people from your former community. These dynamics create a unique online experience, which is what keeps people coming back for more, but also what can turn people off.
Some things to keep in mind in this unique Facebook setting regarding controversial conversations: 1. These online conversations do matter, and they actually can persuade people’s opinions. Research shows that this is esp. t…
Read more