- August 10, 2011
I don't know why Jim's rules allow for 5 movies and only 3 books on the Deserted Island. (I don't really understand how we get to watch the movies either--did a portable device with limitless battery float ashore?). No matter. Not my rules, so we played along. Karl and I both immediately said, "#1: The Bible," and he replied, "That's a given. Let's each pick 3 in addition to that." [And this is where one bent rule led to us making up our own game...but I'll get to that in another post]. While I selected my movies based on criteria of enjoyment and inspiration, the printed word can have so many more functions than that, so we made our choices based on which books would prove most advantageous to us in a deserted island environment. At first I thought about grabbing a medical-self-diagnosis book and an encyclopedia of tropical plants, but then I thought that in isolation, my MIND would need more protecting than my physical body (even though my physical body is pretty wimpy). With that in consideration, these are my book selections:

Book #1: A giant Crossword/Sudoku/Various other puzzles book. The biggest one there is. Gotta keep the brain sharp. Hopefully I'll have brought a pencil with an eraser the size of a pineapple, but if not, that'll add to the challenge.

Book #2: The Hiding Place The real life drama of concentration camp survivor Corrie Ten Boom. Her story, her faith, the miraculous things that occurred would all serve as great reminders of God's protection over me. The fact that her circumstances were much harsher than mine would serve to keep things in perspective. 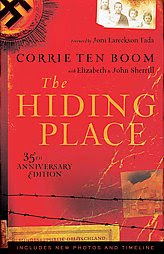 Book #3: Operation World This book is like an encyclopedia for prayer--it has every country, tribe, and tongue known to man listed, and it lists how to pray for each specific people group. Since God made us with the purpose to glorify Himself through worship and through telling others about him, on a deserted island, I would only be able to fulfill my purpose in part...UNLESS I prayed for the others of the world even though I couldn't interact with them. Living with purpose is vital. I cannot foresee maintaining any peace of mind (or joy!) unless my life had a purpose which lined up with God's will.
I recall a story a preacher once told about an elderly lady who had lost the ability to move or speak. All day long, she lay in her bed staring at pictures on her wall. Her family cared for her and pitied her--she must be so sad, staring at the pictures, thinking of memories that can never be again. Months and months passed before they deciphered that she was in fact spending her entire existence in prayer. (I don't remember the details of HOW she communicated this-- maybe they finally hooked her up to one of those machines that can speak from the movements in your brain, or maybe they developed an advanced system of winking...I can't recall, but this part I do remember) she stared at the pictures of cherished family and friends, and lifted them up in prayer. And she, in some rudimentary way, communicated with her family to not pity her because God had given her a task on this earth and she was content with that. They then filled her wall with pictures--brought in bulletin boards of collages! What an eternal impact she had while lying in her bed!

So after the bent rule of bringing 4 books, we decided to expand the media allowed even more and created a whole new category for music...
Desert Island Part 1
pop-culture Renewing My Mind