- July 22, 2012
"The Earthquake Summer", that's what our Italian staff said we'd be known as forevermore. We experienced 2 earthquakes and 200+ tremors during our six weeks in Bologna, Italy. They occurred 20 miles north of where we were staying; this is where the fatalities and damage occurred (you can read all about it here) although we did feel the ground move, and the buildings sway! One earthquake happened while I was helping my big girl out of the shower, and we fell on top of each other! We simultaneously thought that the other person had tripped, then we noticed that the mirror on the wall was moving, and then that the whole building was moving! I grabbed my wet kid, and ran across the moving apartment to secure the other 2 little ones in a doorway.

For the second earthquake, I was with Caitlin, another staff gal, in an outside eating area. Because the space was wide and open, I couldn't detect the movement of the buildings with my eyes, but I felt the strangest sensation of dizziness, and then the image of her across the table blurred back and forth like we were in a fun house at an amusement park. I have never experienced a stranger feeling than that of the ground beneath my feet moving. To see the top of the ground in tact, but to feel that something deep down in the foundation is not secure, left me unsettled, physically and mentally.

The University closed for a few days, and the people of Bologna mingled outdoors as reports of another bigger earthquake could occur "at any moment." Parents beckoned their students home, and we all rested less easily, esp. since the aftershocks rattled our beds in the middle of the night! ;) Pictured below, the kids, Catherine and I escaped from swaying buildings at a skateboarding park on campus. 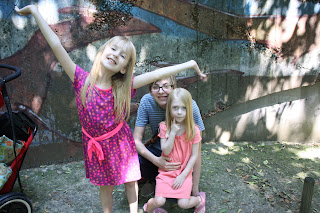 God answered our prayers and there was not "another, bigger earthquake." He protected us, and we learned a deeper appreciation for the hymns, "On Christ the Solid Rock I Stand" and "How Firm a Foundation" which the kids and I would sing together during times of shaky ground.

After a couple of weeks, fears subsided in Bologna. I had reoccurring dizziness through the entire 6 weeks. At one point, I thought I was suffering from Post-traumatic-stress as one night while Karl and I tucked the kids in bed, I felt the floor move, and yelled, "Kids, get to the doorway, quick!" They started to obey with a dazed expression, and Karl said, "What are you doing?" and I replied, "Earthquake!" And he said gently, "Uh, there is no earthquake."

I started to think I was going crazy, but then I heard reports that there was still a lot of ground activity, and we had experienced over 200 tremors in a few short weeks. A few others had felt them too. I seem to still have all the heightened senses that come with young motherhood, so it made sense that I would be more sensitive to this as well. At least it wasn't my imagination! :)

Now that we are home, I have still experienced some dizziness. I know that the ground isn't moving, but something in my equilibrium is a little off. I'm seeing a doc about it this week.

Here's a great rendition of How Firm a Foundation by my home church Prestonwood! Wow, did I miss them while we were away!