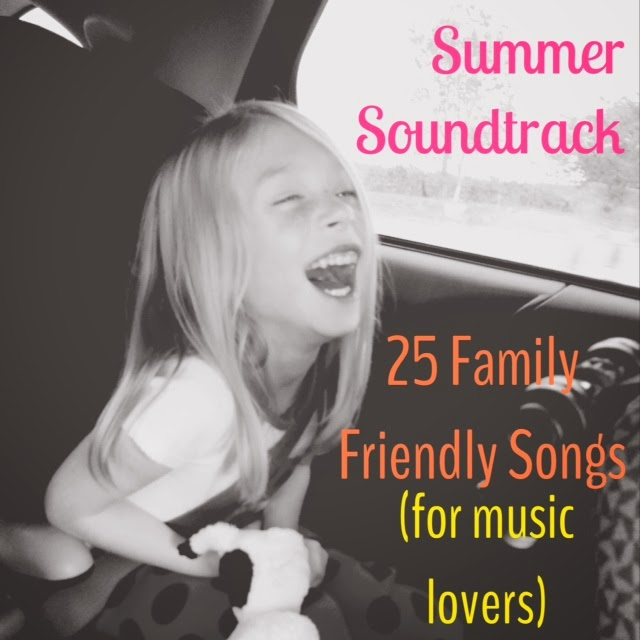 Even though stores are transitioning to Fall merchandise, it's the dog days of Summer here in Texas. I am not embracing flannel and knitwear just yet. We're still relishing in the pool and ice cream sundaes.

Here's our soundtrack for Summer 2014. Our mix spans the decades, genres, and encompasses sunshine, fun, late nights, and other things that we associate with summer.

1. Summer, Calvin Harris. Gotta start off with the 2014 Summer anthem!

5. Little Deuce Coupe, The Beach Boys. 1963. I can't have a summer playlist without a Beach Boys song.

6. Song of the South, Alabama. 1988. I love the history in this song, and my kids love singing about sweet potato pie!

7. The Star Spangled Banner/4th of July Reprise, Boston. 1997 (or 1812 depending on how you look at it). Classic rock celebrating America. Thankful for our country. Hubby is thankful for Boston on the playlist.

9. Sandy (Alone at the Drive-In), John Travolta (Grease Soundtrack). 1978. Nothing says summer like a drive-in movie, and I giggle thinking of the cute drive in cartoons that play in the background during this movie scene.

10. Fantastic Shine, Noise Reaction. From Spain, 2012. This is the summer anthem of Spain, introduced to us by our lovely exchange student last year, and it's now part of our summer association. (This link is to a cover video. The more popular Spanish video is a commercial, but I think this cover is so sweet and very well done!)

13. Somebody that I Used to Know, Gotye. 2012. Some songs you just associate with that wave of heat and the hairdryer of the car air conditioner. This is one for me--the summer song of 2012.

14. Mr. Heatmeiser, Big Bad Voodoo Daddy. 2004. Yeah it's from a Christmas show, but when you hear it by this band, it's totally appropriate for 100 degree weather.

18. Ain't Goin' Down (Til the Sun Comes Up), Garth Brooks. Summer 1993. If your kids are like mine, they assume that this irresponsible out-all-night behavior belongs to college students. Honestly when my kids are in college, if their "late at night" behavior consists of dancing to country music coming from a friend's pick-up truck, I don't have a problem with that.

19. Swingin', John Anderson. 1982. My kids' favorite that they have learned this year! The lyrics are so simple and happy that they understand it completely--chocolate pie, fried chicken, waterin' the garden. Good ol' country summer!

21. Peaceful Easy Feeling, The Eagles. 1972. If pressed, there can be adult themes in this one--"I may know you as a lover and a friend..." Because we regularly talk about lyrics, they will ask if they don't understand something. To them, the word "lover" means someone who loves. And why not keep it as innocent as that?

23. Fishin' in the Dark, Nitty Gritty Dirt Band. 1987. Fulfilling my dream of singing rounds in the car!

24. Summertime, Louis Armstrong & Ella Fitzgerald (from Porgy & Bess). 1957. Honestly my kids are least excited about this song, and I understand--it's different to them and it's not as peppy as the rest, but I love broadening their scope of music. And when I put it before their absolute favorite, they will listen to it and hopefully grow to love it.

25. In Summer, Josh Gad (Frozen Soundtrack). 2014. Let's bookend the playlist with this year's hits. And my daughters' expressive vibratos when belting out this song make me smile ear to ear!

I love our playlist because it has so much variety! I love all types of music and desire to expose my kids to the many beauties within each genre, culture, and era. Sometimes we listen to "kid" music, but I like to find songs that we can all enjoy together, and it's our common practice to talk about what they are hearing. I don't want them to be blind consumers. Some of these songs provide opportunities for deeper conversation, such as #11 and #13 because of their poetic verses, and some are just plain fun like #20 and #25. Which are your favorites and what's a constant on your summer playlist?

[You can read our previous pop-music discussions here. I was surprised upon reviewing that I only blogged 3, because we have conversations about music alllll the time!]