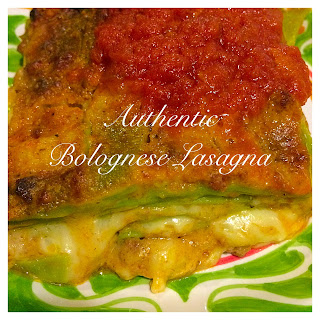 One thing I've learned in Italy--Italians will scoff at the idea of ricotta cheese in a lasagna.
Instead, there is a melt-in-your-mouth creamy layer that I could never get enough of, and could never quite identify. Until now! Thanks to my new friend, Roberta!

Roberta took pity on me under her wing, and said yes when I invited myself invited me into her kitchen to teach me how to make her lasagna, which I had raved about eating a few weeks before.

"What IS this creamy stuff?" I asked her, and "Wait, do I taste cinnamon in here?!"

So we did it together start to finish, 5:30-8PM. And she said this was faster than her mother's lasagna. :)

We added two pounds of meat to this, which would become our ragu sauce--beef and ground pork, which she said keeps it from being too dry. We browned the meat just a little, salted generously, added about 1/4 c water, and let it simmer on low heat while we prepared the rest.

Next, the besciamella (the amazing, creamy, non-ricotta stuff that just makes this perfetto!)


This portion would normally make me impatient, but I was surprised that it was actually relaxing. It was slow and easy, not stressful or frantic.

Roberta said, "Yes I think it is relaxing after a long day to come home and cook."

I remarked how it is not always that way, especially when trying to get something on the table quickly, and how if I were making this in America, I would've already been pushing buttons on my electronic gadgets. Roberta commented how that would not be as satisfying at the end. She is right. I appreciated those carrots more since I grated them myself.

We both agreed that cooking can be an art.

Fast forward--the white besciamella is done when you stop stirring and it could boil on it's own (although you don't allow this to happen). It's a little thicker, like cream, but no where near as thick as a gravy.

[*Note about draining grease: I remember making an authentic ragu in America, using American beef, and it was excessively greasy. It had a thick layer of congealed grease on the top when it cooled. This ragu doesn't do that. I've noticed while cooking in Italy that the beef is much leaner. Sometimes I even have to add a teaspoon of olive oil to the pan just to keep it from sticking. So my advice for my friends in America is to drain it a little before adding the tomatoes and wine, but definitely don't rinse because you remove the flavor of the carrots and onion. The only exception to this might be an extra-lean grass fed American beef.]

Now the layering! Choose your favorite box lasagna noodle. (Restaurants in Bologna typically serve a green noodle lasagna, which contains spinach in the dough. Many noodles are homemade here, but box noodles are just as common, and with a lot of variety.) Each one will have slightly different instructions, so follow the directions on the box.

Roberta said she hopes to teach music in the future, unless of course she first becomes famous from this blog, and gets her own cooking show. :) I asked her if she knew of Giada de Laurentiis. She had not. I asked her if there was a cooking show in Italy that was famous for American food. She again so kindly replied, "No, because this is Italy!"

Italy--where cooking is an art of relaxation, satisfaction, and creamy deliciousness!