Showing posts from January, 2017
Show all

Rogue One Review written by a Casual Star Wars Viewer 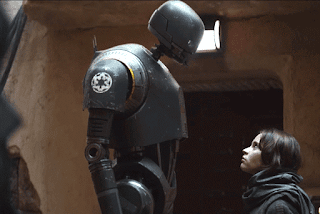 My family loves Star Wars movies, and I've liked them, although not with nearly as much fervor as anything starring Lauren Graham. I've seen some of the films more than once, but I can't tell you the trivia. Princess Leia, Chewy and the Ewoks were part of my childhood, so there's affection there, but in general, the genres of sci-fi or fantasy are not my preferences. I REALLY enjoyed The Force Awakens, but hubby had to remind me of its title-- "What was the Star Wars before this one? The one we saw last Christmas?" I realize that this probably causes disdain in avid Star Wars fans, however, I represent a large portion of ticket buyers, and while there is a sea of Star Wars commentaries written by the fervent and faithful, I decided to represent the casual Star Wars viewer by sharing what I liked about the film Rogue One. Basically, I'll be content with a Star Wars experience if it contains these 7 elements, and Rogue One delivers! 1. A Dynamic Droid
Read more

Ingredients That We Avoid

- January 14, 2017
When we eat out at a restaurant once or twice, our bodies can cope. But when we do it multiple days in a row, we begin seeing reactions in many different realms of health. I don't like to be "that person"--the one who frets about what they eat, the one who abstains from the party food, but I also don't want to be feeling sluggish, battling headaches, or relying on OTC digestive aids. From everything I've studied, those symptons are like huge red flags--our bodies' ways of saying, "CHANGE SOMETHING!" When we returned to the USA after living in Europe, my 8 year old daughter had severe migraines several times a week. 8 year olds shouldn't get migraines. Either she had a serious neurological problem, or her body was desperately sending a message. We took note--every time she had a migraine, she had consumed a product with high fructose corn syrup.  She loves sweets and ate them whenever offered. She was eating a balanced diet daily, so I didn'
Read more

Update:Thank you for reading and sharing this post! It is my most viewed ever. It has been shared by Bible Gateway and picked up by Cru and republished an abridged version . Here's the original: I've spent 15+ years in ministry, and I've noticed a problem: people who say they believe the Bible haven't actually read it, and people who don't believe the Bible don't want to read it. My response to both groups is this: YOU ARE MISSING OUT! Why? Because the Bible is the best proven source for life-changing joy and peace. And since it's misquoted and misrepresented all the time, you need to actually read it yourself in order to know if you do/don't agree with it or do/don't want to read it. When I mention this, it usually surfaces at least one of these 10 barriers that prevent folks from completing it. Do you relate to any of these? 10 Reasons Most People Don't Read the Bible, Refuted 1. I'm not religious. The Bible is the best-selli
Read more
More posts