Walking Alone without a Phone

- March 21, 2020
What'd we do before cell phones when our car broke down? Well, we had to walk, and if walking was too far, we had to approach someone for help and hope they weren't a murderer. Here's my story (spoiler alert, I wasn't murdered). ;) 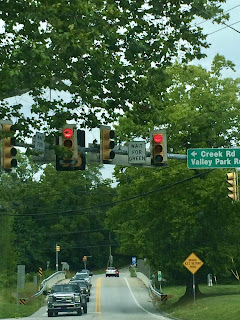 The summer my husband Karl and I got married, in a year that began with the number 19, we moved into a small apartment in our college town. It seemed almost like a ghost town in summertime--the roads and businesses that were usually packed were practically empty. We didn't have even one friend who had stayed in town for a summer class, but since we were high on life, that didn't matter much to us. The weekend we returned from our honeymoon, we joined a church and hopped into a newlywed group. I remember how the pastor encouraged the congregation to applaud for us, partly in congratulations of our marriage, and partly because the first decision we made as a wedded couple was to join a church. We decided to forego the "college church," the one with the big group of young people, and instead we chose a church full of local families. Even though we were only 20 and 21 years old, we felt like bona fide adults now, and we wanted to make friends with other married people. So we chose the "grown up" church and joined a group even though we didn't know a single person there prior.

That next weekend, the wives of the newlywed group were having a girls' night out to the movies. Over the phone, I wrote down directions to the movie theater that was outside of town, the suburbs where all the adults, non-college students, lived. I had never driven much outside of the campus hub, and my old Jeep was a reliable ride except on really hot days. That Texas summer broke record high temps, we had had two weeks of over 110 degrees. It made front page news, hottest streak in a hundred years! And sure enough, Old Jeep couldn't handle it. I had already driven 15 or more miles towards the 'burbs when my car started to sputter and stall on the highway. The nearest exit ramp sloped downwardly, so I let gravity lead me out of harm's way, and I nervously maneuvered Old Jeep to the side of a curb in a neighborhood I'd never been before. Cell phones existed then, but only few people had them, not poor college students. So I did what we did back then when your car broke down, I started walking.

I prayed that God would lead me to someone helpful. I had never felt more alone in that town as I did at that moment. Our college apartment where my new husband sat seemed very far away. Even if I found someone who would let me use the phone, how long would I have to wait for him on the side of the road? And it was starting to get dark outside. The only people I knew on this side of town were probably already at the movies. Back then, if you had an emergency and needed to contact someone at a public place, you had to look up the phone number of the place in a phone book, and the business would page the person you needed. I didn't know the phone number for the movie theater, and I couldn't even remember the last names of the other wives from the group. No, I was all alone out here, and would have to find someone trustworthy in this neighborhood. Only I wasn't alone; the Lord was with me. I said another inward prayer as I surveyed the homes on the first street. I noticed one where the porch light was on, which where I came from was a sign of welcome. I approached the door and anxiously rang the bell. When it opened, my eyes grew wide, as did the eyes of the woman who met my gaze.
"Keri!" she exclaimed my name, "Hi, what are you doing here?!"
"Hilary!" I exclaimed back in a shout of relief.
I had met Hilary once at a gathering for music educators. She was a piano teacher for elementary students and wanted to help connect me with a group of future educators. She invited me in, and I called Karl to come pick me up. While I waited she served me refreshments, and we chatted on her couch about all kinds of things. Her husband helped Karl push Old Jeep into their driveway and let us keep it there for a couple of days until we could get the service it needed.

I have carried that experience with me to this day, more than 20 years later. I saw God's care expressed for me. There's not a doubt in my mind that He orchestrated the whole thing. To think that the one acquaintance I knew lived on the street where my car rolled. That she had her porch light on when it wasn't fully dark yet. That I had met Hilary in the first place at a meeting months before and that we had an immediate affinity even though there were dozens of other people in attendance who I didn't meet, whose names I didn't know. Yes, God's sweet hand was all over that experience.

Several times I've thought about how if I had had a cell phone, I would've missed experiencing God's care and sovereignty in that way. If I had had a cell phone, what would I have done? I would've called Karl from inside my car, and waited for him to come. I would have stayed inside my car until he arrived. Karl would have come just the same, but I would have missed so much. Not just the incredible serendipity of knocking on Hilary's door, but also her hospitality, her friendship, her husband's kindness. Our car probably would've sat on the curb and gotten an ugly yellow sticker on the glass. Maybe a tow and fat bill? But more so, I would probably walk around more anxiously than I do today. From that point on, I have experienced less fear, knowing that my God not only sees me in every moment, but has His hand on every moment.

I have always wanted to write down this story, and now seemed like the time to do it as the world is either scared or inconvenienced, or both. But it's in those moments that we have opportunities to witness some of the best things about being alive: God's ever-reaching care for us, God's unlimited control of all things, and the kindness and kinship of people. I pray that on the other end of these world-altering events, that you will have some amazing stories to tell about how God met your needs, whether tangible or intangible, whether in the midst of tragedy, or disappointment, or discomfort. And I hope you write down those stories and cherish them. May the moments you didn't choose bring you revelations that you wouldn't trade for anything.
God's faithfulness God's protection